What are these notes about?
These notes are designed to tell you some more about us to help you make your mind up whether or not you want to join.
Please read them, think about them and decide for yourself what you want to do. We are on hand at any stage to give you any additional advice you need.

Who are we?
The Gordon Highlanders 1914-1918 is an organisation of civilian re-enactors which exists to re-create as accurately as possible the life of the soldiers of the Gordon Highlanders during the Great War 1914-18.
All members of the Regiment wear the exact uniform and equipment of the period and carry the Short Magazine Lee Enfield rifle (S.M.L.E.).
We aim to achieve the highest standards in Great War re-enactment. We are a relatively new unit, so if you join us now, you have a chance to play a part in moulding the Regiment and helping us set the standards for later recruits to follow.
While several Great War re-enactment societies in the U.K. represent Highland soldiers as a side-line, we are the only society in the country dedicated full-time to representing the Highland soldier of the Great War

The Regiment we represent
“the finest regiment that ever was” Winston Churchill
The Gordon Highlanders were formed shortly after the outbreak of the French Revolutionary Wars, when in 1794 the 4th Duke of Gordon raised the 100th Highland Regiment. The number was changed to the 92nd in 1798. The Regiment first saw action the following year in the Helder campaign. Then in 1800-1801, it was involved in the Egyptian expedition, as a result of which the Regiment was granted the entitlement to wear the Sphinx badge, with the inscription “Egypt”. This was worn with pride until 1872 when it was replaced by a badge featuring a stag’s head and the motto “Bydand”, based on the crest of the Marquis of Huntly. 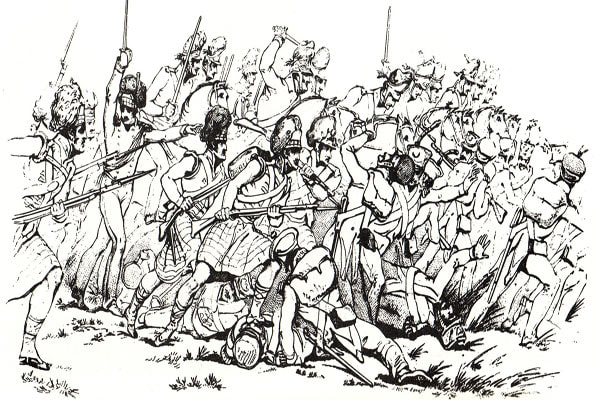 The Gordons and The Grays at Waterloo 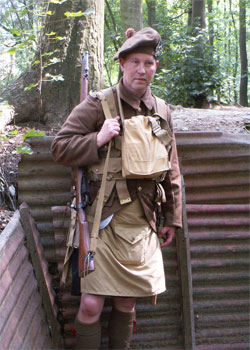